In her 87 years of life, Ruth Bader Ginsburg revolutionized many things we take for granted today. Ruth Bader Ginsburg or RBG, for short, will forever be remembered as a champion of equality and feminist icon due to her unequivocal crusade to make life better for women—and men—in the United States.

As an essential advocate for gender equality and women’s rights, RBG routinely campaigned for equality throughout her professions as a lawyer, activist, professor jurist, and ultimately, an Associate Justice of the U.S. Supreme Court. Appointed by President Bill Clinton, RBG was the second female justice to be confirmed and served on the highest court for 27 years.

In her time as a lawyer, RBG won multiple victories in the high court to protect against gender discrimination and affirm gender equality in the workplace. She continually fought to protect reproductive freedom and also co-founded the Women’s Rights Project at the ACLU in the early 70s to propel the mission towards justice.

"Women's rights are an essential part of the overall human rights agenda, trained on the equal dignity and ability to live in freedom all people should enjoy." - Ruth Bader Ginsburg

With the continued help and support of women everywhere, RBG was able to stand strong in her efforts and redefine what it means to be a womxn in the United States. RBG played an important role in many fundamental cases surrounding gender equality and sexual identity, we’ve listed just some of her progressive work below.

State-sponsored schools could no longer bar admissions from women.

In the 1996 United States v. Virginia case, Ginsburg confirmed that it is unconstitutional for schools funded by taxpayers dollars to bar women.

If you are an independent woman with a home, credit card, or car in your name, you can thank RBG as her work surrounding women’s financial independence paved the path for the 1974 Equal Credit Opportunity Act . This act allowed women to apply for credit cards and mortgages without a male co-signer.

Strengthened the fight towards equal pay and closing the gender pay gap.

Preserving a woman's right to choose.

RBG consistently defended Roe v. Wade among the many attempts to ratify the law. Since the 1970’s, she’s never shifted her opinions and took action in protecting this crucial reproductive right.

“The decision whether or not to bear a child is central to a woman’s life, to her well being and dignity. It is a decision she must make for herself.” - Ruth Bader Ginsburg

Protected pregnant women in the workplace.

RBG defied common prejudices against pregnant women in the workplace by hiding her own pregnancy when she taught law. As a justice, she argued that excluding a pregnant woman from the Air Force, like in the case of Struck v. Secretary of Defense, is sex discrimination and led to further equality in the workplace.

“We should not be held back from pursuing our full talents, from contributing what we could contribute to the society, because we fit into a certain mold ― because we belong to a group that historically has been the object of discrimination.” - Ruth Bader Ginsburg

Gave women a voice on juries in the same way as men.

Before RBG, women’s jury duty was optional as it would take away from their role as “caretaker” in the home. Deemed unjust and unfair, RBG spoke out and fought for women to have the same voice as their male counterparts when it came to making decisions in court.

"Women belong in all places where decisions are being made. It shouldn't be that women are the exception." - Ruth Bader Ginsburg

Granted the queer community the ability to get married.

In a 5-4 ruling, RBG solidified that love is love and helped grant the LGBTQ community the right to wed in all 50 states.

“All of the incentives, all of the benefits of marriage affords would still be available. So you’re not taking away anything from heterosexual couples. They would have the very same incentive to marry, all the benefits that come with marriage that they do now.” - Ruth Bader Ginsburg

Ruth Bader Ginsburg defied stereotypes and made the impossible feel possible for women everywhere. Although she is gone, she will never be forgotten as her lasting legacy makes an impact on those for generations to come. RBG is the prime example of how a woman’s determination, strength, and power. She continually knocked down roadblocks and made it easier for women to reach greatness. 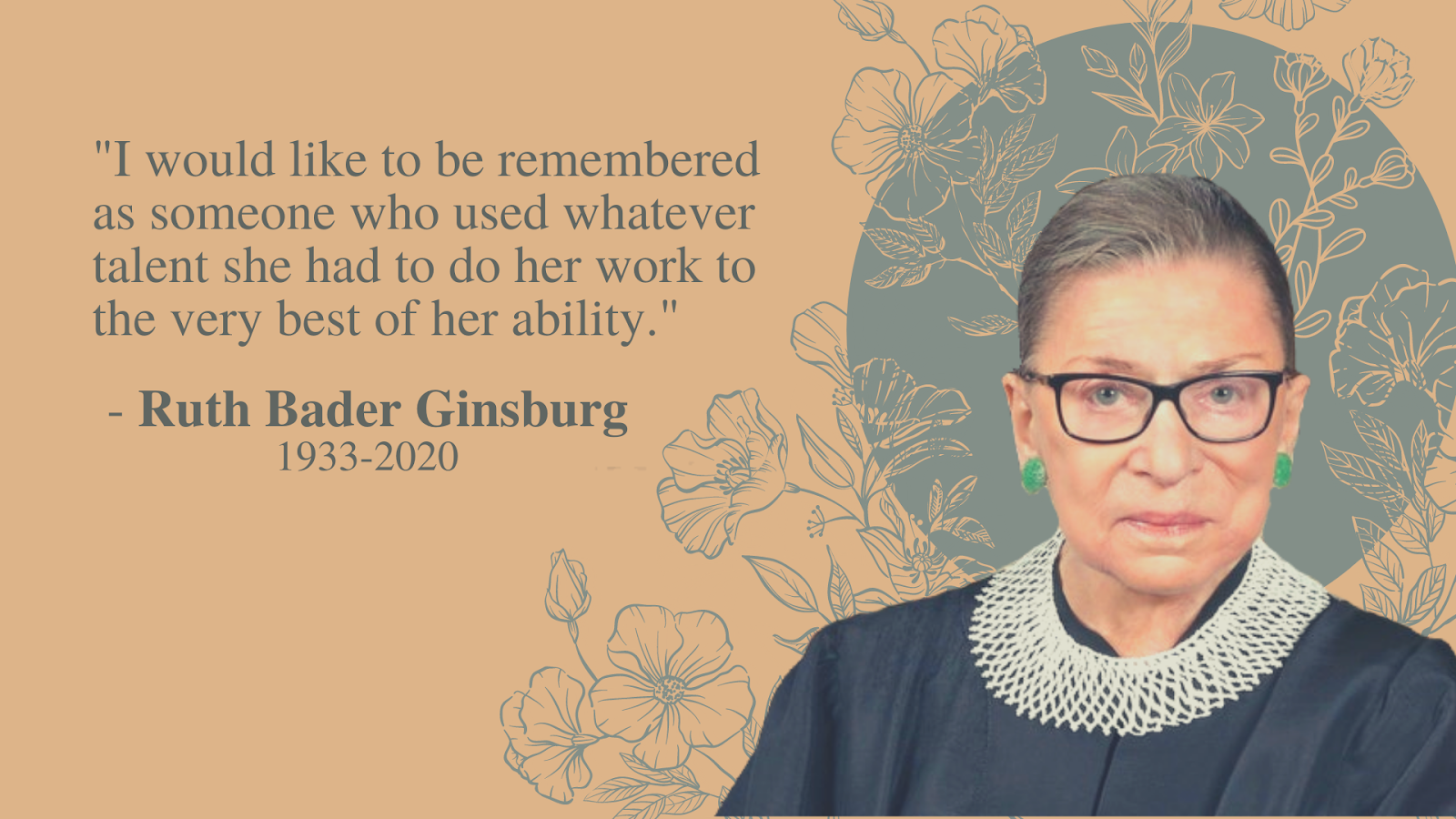